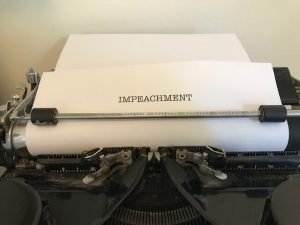 Donald Trump has fully earned impeachment and removal from office. Democratic Party leadership opposes impeachment, because they fear the Senate will not remove Trump, and as a consequence, it will undermine their prospects in 2020.

There are several problems with that thesis. First, it presumes at a minimum that the 2020 election will be more or less free and fair. That assumption is unwarranted.

Republican voter suppression of Democratic voters is constant and ongoing. Last year, for example, the five Republican judge majority on the U.S. Supreme Court in Husted v. A. Philip Randolph Institute upheld an Ohio law purging from the voter rolls persons who had not voted for six years, unless they re-registered. In her dissent in Husted Justice Sotomayor explained the law was voter suppression plain and simple and cited documentation that it disproportionately disenfranchised, among others, minority voters. Minority voters, of course, lean heavily Democrat.

Several states have enacted a requirement voters present government-issued identification. Again the rule disproportionately disenfranchises people of color. Numerous other methods of achieving this end have been and can be used.

In 2020 if Trump is running, we are sure to encounter ramped up voter suppression. Perhaps he will justify the additional measures as means to stop the “non-citizen” voters he invented to explain Clinton’s winning almost 3,000,000 more votes than he in 2016?

Then there is increasingly aggressive Russian election interference. The New York Times recently reported there is evidence Russia successfully hacked into voter rolls in Florida last year. Unsurprisingly, Trump effectively has green-lighted further Russian interference (which Mueller showed assisted Trump in 2016) by precluding cabinet officials from even raising the issue.

Also, there is the considerable possibility the Democrats’ own incompetence could cost them the 2020 election. While Russia conceivably tipped the 2016 election for Trump, absent what former Bill Clinton pollster Stanley Greenberg dubbed the Democratic campaign’s “political malpractice and arrogance,” Trump would not have won.

In 2004 they lost to George W. Bush, who had taken us into a disastrous and unlawful war in Iraq based on phony intelligence and who was the first American President since the Great Depression to have failed to generate a single additional job during his four-year term.

Impeachment proceedings provide the Democrats the opportunity to establish a compelling narrative of Trump’s extraordinary malfeasance. Such hearings undoubtedly would include first-person accounts from the witnesses on whom Mueller relied, such as former White House Counsel Don McGahn, detailing Trump’s repeated and felonious abuse of office to obstruct the investigation into Russian interference on his behalf in the 2016 Presidential election. (As Mueller’s report explains, obstruction of justice is committed by an obstructive act, such as firing FBI Director Comey, executed with the intention of obstructing an official proceeding, such as the FBI investigation — regardless of whether act succeeds, e.g., whether it stops the investigation).

Impeachment hearings also would describe Trump’s numerous covert and discrediting links to the Russian government. Those would include his pursuing a real estate project in Russia while he was running for president and his senior campaign staff meeting with a Russian government agent to secure assistance with his Presidential campaign. Trump repeatedly lied in public to conceal these links. Given the numerous ongoing counter-intelligence investigations pertaining to Russia, and criminal prosecutions spun off by Mueller, it is likely additional evidence of such links would be disclosed in impeachment hearings.

The importance of these covert and discrediting links, regardless of whether they are criminal, is that like the “pee tapes” rumored to be held by the Russians, they provide the Russians leverage over Trump, i.e. the Russians could disclose his secrets. Absent some such leverage; it is difficult to explain Trump’s conduct towards Putin and Russia, such as his destruction of notes held by any American present at his meetings with Putin, and his obsequiousness in Putin’s presence. Few Americans will approve of Trump once he is shown to be, in a sense, “Putin’s poodle.”

While impeachment proceedings likely would show even more grounds for impeachment, such as Trump’s violation of the Constitution’s emoluments clause — an offense akin to bribery — the bottom line is that impeachment hearings will demonstrate Trump needs to go. The retort that hearings won’t matter, because Trump’s “base,” presumably referring to his typical 40% approval rating, is unshakeable is manifestly wrong. Base is what is solid, and the 40% is not. For example, only 25% of voters strongly approve of Trump’s performance. That suggests a considerable portion of Trump’s supporters, as is typical for those of any president, can be switched.

Consider the case of Richard Nixon. On the day he resigned, after impeachment proceedings had convened, the Gallup Poll showed 24% of the public stood by him. Yet, for most of his presidency, Nixon’s approval exceeded 50%– a level significantly higher than Trump ever reached. Why should Trump fare better? And if he does not, why would not many Republicans today do the same thing to Trump they did to Nixon in 1974, abandon him?

The Democratic leadership maintains impeachment without removal would mobilize Trump’s base in 2020. Yet, as the political scientist Jeffrey Isaac has observed, Trump’s base is and will remain mobilized by his ceaseless racist and jingoistic incitement, regardless of impeachment. Conversely, impeachment proceedings likely will reduce Trump’s current support, perhaps down to his true base.

While it is impossible to be sure what impeachment proceedings will bring, based on what we know, impeachment is the Democrats’ best option politically, as well as legally.